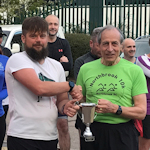 The 2018 Northbrook parkrun cup competition reached its conclusion with the final knockout rounds taking place in April. The 50 runners in the starting group were gradually eliminated to get down to the final two. In the final, Mark Parker’s 22m 19s was a 2-second improvement on his best whilst Damian Pharoah’s 19m 03s time was 9 seconds away from his, giving Mark an 11-second advantage and with it the parkrun cup.

Club President Tony French presented the cup at the Club’s Wednesday night training session on 25 April. Rich Cawley the competition organiser remarked on the popularity of the competition and the sense of fun and friendly rivalry it has introduced to the Coventry parkrun event.