If you arrived here because you are thinking about joining a running club then you have come to the right place.
Why not come along to our Wednesday night training sessions and try out our friendly welcoming Club.

Take out membership and enjoy the experience of Club running. Not sure if you want to join up - then try before you buy. Run with us as a guest for a few weeks before signing.

See the How to Join Page for more info.

The cross-country season is nearing its climax as we head for the fourth and final fixtures in the Birmingham Invitation Cross-Country League and Midland Women's League that started on 9 November, with Northbrook co-hosting both the men's and women's 1st fixtures at Coundon Hall Park in Coventry.

For the 3rd fixtures on 11 January the men ran at Stoke, the women trying out a new local venue at Coombe Country Park, Coventry.

Two Northbrook members received recognition of their WRRL 2019 category placings when the awards were presented at the WRRL AGM on 6 November.

Members of clubs present at the AGM voted to approve eleven races for inclusion in the 2020 League which starts with the Massey Ferguson 10k on 13 April. Northbrook's own 10k race on 12 July is also included.

The Celtic team includes Wales, Scotland and Northern Ireland, so Mark will be proudly wearing his Wales vest.

Mark last represented Wales ten years ago in the 100km Anglo-Celtic-Plate event held in Galway in 2009, where he was 4th Welsh finisher in a time of 10h:38m.

John Pollard was invited by Welsh triathlon to represent them at the British Championships in Nottingham on 15 June in the 60 to 64 age group.

After getting the bug and taking up triathlon only 5 years ago Anita Howe has competed for the GB team in her age group since 2015. Although a Northbrook member, work commitments and a heavy training schedule with the DO3 squad means she's not often seen at the Wednesday session but she runs in the club colours when she can.

Wrapping up the 2019 season eighty members and guests turned out for the final handicap race on 4 September.

First home was Becky Colbourne in her second race win of the season, adding 30 points to her series total. Rick Wise in 3rd place gained the maiximum 50 points by being first Northbrook man to cross the line.

With 134 points from 5 races Lottie Graham ended the season with a 21-point lead at the top of the women's table, ahead of Pia Singh and Martina McConville tying on 113 points.
In the men's table Alan Hewitt with two race wins overhauled Tom Dempsey's earlier bonus point assisted lead to take the top spot with 194 points from just 4 races. Tom Dempsey finished 2nd and Martin Gavin took 3rd place.

Participation this season has been at an all-time high, with 145 members and 43 guests taking part across the six races, with a total of 107 in Race 1. Nine men and three women took part in all six races.

Results of Race 6 and series results.

More info about the series ...

The Club's Annual General Meeting will take place on Wednesday 29 January 2020 at the Jaguar Sports & Social Club. The meeting will start at 8.30pm after the normal training sessions.

The Club committee is elected by the membership each year at the AGM. Details of committee and non-committee posts, how to vote, the meeting agenda, and the proposals submitted for consideration at the meeting are in the formal Meeting Notice.

The Club draw for its allocation of two guaranteed entries to the 2020 Virgin London Marathon took place at the Jaguar Sports & Social Club on 20 November and the winners were Richard Hands and Catherine Shepherd. The reserve is James Lacey.

The club also has up to 10 places available for the 2020 Brighton Marathon. So far 5 people have show interest. For more on this contact Mark Baker, either directly or via the Contact page.

Members of the Northbrook 10k organising committee visited Oakfield House to present a cheque for £1,700 to Coventry Cyrenians the major charity beneficiary of the 2019 race. 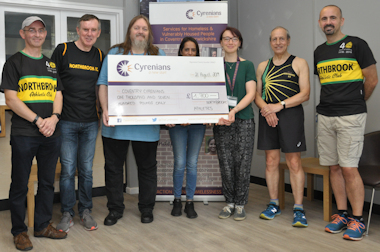 The results are in, the books are closed and the tables have been finalised.

Natasha White scored maximum points from all her eight race distances to keep her lead at the top of the women's table. Gemma Ross, Amanda Deavy, Cath Fenn, Sally Eason, and Ros Myers lead the other women's categories.

The Road Race Champs tables are compiled from Summer Handicap results, and from results of qualifying races sent in to the web site.

The Warwickshire Road Race League is a series of short and middle-distance road races running from Spring through to Autumn. The 2019 series features 11 races starting with the Massey-Ferguson Tractor 10k in April and finishing with the Rugby 10 mile in October.

Runners of the Month

Previous Runners of the Month

A range of Club branded running apparel available to members at attractive prices.
Visit the Northbrook Kit Shop to see what's on offer.

Wednesdays at 7.30pm
Mondays at 6pm

Think you may have missed something?
Read about it here.

Can't find what you are looking for?
Try searching the archives.