A 14 mile trail race in the Cotswolds, and potentially the hilliest one I’ve ever done. The climbs certainly never seem to let up. Fantastic route all the same. I still need to get some fitness back post-injuries, so really struggled on the uphills. Flew on the downs though.

I’m not particularly happy with the time, but just making it round without aggravating anything was a success. All in all, a really fun day out. They even give you beer at the end.

Another half with waves, but it didn’t pan out exactly as the organisers expected. Rather than have the crowds waiting behind the start line, it simply moved the crowds to the entrances of the holding pens, but it seemed to work quite well and my wave 18 went off more or less when it was meant to.

The new Cambridge route is really good, virtually flat all the way (they got rid of the 1 hill that it had last time), and very picturesque, even running around the quadrant of Trinity College which featured in Chariots of Fire.
My only gripe was that there were only 2 water stations, at 5.5 miles and 11.5 miles (the organisers claim UK Athletics are requesting that race organisers reduce the number of water stations which seems a bit odd).

The goody bag at the end was excellent (hessian tote bag with Cambridge Half printed on it) and full of things to eat and drink.

Next year’s race is back to its usual March date and a flat course which screams "PB". Perhaps a new more Northbrookers next year?.

Weather conditions for the 2021 Run Silverstone started off fairly overcast as all of the runners took their positions on the Start finish straight of the home of British Motorsport. The race was an unusual one with all distances (5km, 10km & HM) starting at the same time. Conditions were good and dry so all runners had their dry tyres for the race.

Lining up on the 2nd row of the grid was the speedy Amanda Deavy getting ready for her return to the Northamptonshire retired airfield. On the 3rd row we had the trio of late replacement Tori Boyle tackling her very first large participation event and her first official Half-Marathon, closely followed by Caroline Hughes taking on the 10k and Stewart Pearman also attacking the Half-Marathon. The 4th row consisted of me attempting to block out injury and make it around the 13.1 miles, lining up with some runners from our local clubs. Then on the 5th row were the ever-reliable Jane Stephens and Yvonne Boyle both prepared for their 10km ahead of them.

From the start at Copse Corner everybody had to get into their race mode and not be put off by the faster runners taking on shorter distances for the first mile and a half before the 5km runners peeled off around the back of the new International Pit Wing as the other runners carried on around the remainder of the track, turning into the National Pits and running alongside the straights before the 10km trio turned around at Stow Corner to run back to the finish at Copse, with Caroline sprinting up Hanger straight and Maggots on her way to a 10Km PB. Jane and Yvonne had a steady run with Yvonne scoring her 3rd quickest 10km. Meanwhile our remaining entrants took a very convoluted tour around the Silverstone inner and outer roads crossing the track a few times to complete their distance. Amanada led the teams around with her first sub 1:30 HM for 3 years, Yvonne gave an amazing performance to take her fastest HM time, Stewart putting in a solid race, and me having a nice steady run until running out of fuel at Stow and limping back home.

After the results were finalised Amanda came 2nd in class and 5th Female overall.

Although billed as a half-marathon the course was a bit long at 13.25 miles.

This was one of those on-again, off-again races scheduled for April then moved to October. Verity, Graeme, Sarah Mc and Liz P were all down to do this one originally but injury and life got in the way and put paid to those plans.

Marathon training plans went out of the window for Claudie and me but we pitched up anyhow to see what a supposedly flat road course had to offer. We travelled up with Liz on Saturday and popped in to the decidedly low-key Event HQ on Saturday. For the second biggest marathon in the UK it was deeply unimpressive and a bit of a shame that the Half Marathon tees were a much better design (bees, they had bees!) than the corporate logo of the full. Bumped into Dorota (Kenilworth), Lisa and Jill (MCR Half). We repaired into town to an excellent trattoria for some Italian cuisine, followed later by the best ice-cream in the whole wide world at Heavenly Desserts.

Marathon morning dawned and the exquisitely crafted travel plan kicked in to avoid road closures and the anticipated travel strike (called off at the last minute). Off into deepest Cheshire to get the tram in. Worked a treat. Very late starts (both after 11am) meant a lot of hanging about but the weather was very kind even if there was no coffee to be had. Then the race happened. Claudie trotted off at her usual Duracell Bunny pace and delivered a 4:13 result which is "good for age" in anyone’s book. I pootled along and enjoyed the scenery and the excellent support along the route, including a nice young lady very excited to see a Northbrook top. Turns out it was Ade & Liane’s daughter.

Up at the front Natasha’s official (at time of writing) 3:08 was a mis-recording and a number of people had the course as long. I had a watch failure at 3km so had no idea. A whole bunch of other people were out there, so well done to all. It was Debbie’s first full Marathon and my first full on-road Marathon. Personally, I’m not sure the Marathon is my distance but I’ve now ticked that (road) box. Joe Kelly had to retire injured. 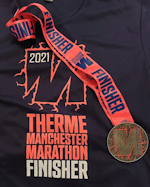 Fantastic Marathon, mostly flat but was tough going as we were running at midday and it was a warm. I am not used to running at that time of day. Great sportsman spirit from runners checking if other runners are OK if they stop, and fantastic supporters, especially all our Northbrookers. PB for me – Joanne

This was my 3rd time running Manchester. Conditions were very good this year and the support was as good as ever, with lots of additional support on the course from friends, family, and fellow Northbrookers. I had done my longest Ultra a few weeks before (39 miles) and I knew my legs wouldn’t be 100%. So I approached it with the hope of maintaining a conservative 10.30 per mile pace and ended up doing just that, with a 4:36 time which was pleasing. Even more pleasing that I beat Batman, Robin and Wonder Woman – Cliff

Four Northbrookers (the Rugby 2 plus Spencer and Allison) and two supporters turned up on this autumnal day in October. The weather was sunny and getting warmer, and it was nervousness from the word go as the race had "sold out", with a comparatively large field of over 900 runners. Is this a sign normality is on the way back? It certainly felt awkward being shoulder to shoulder on the start lines.

We were soon set on our way, and the spaces quickly started to appear. Tom had already disappeared off towards the front, Rob and me starting together. The weather was warming but the organisers put on plenty of water stations. This I presume was to stop bunching up at the water stations. I took a bottle on the first station as my mental aid to get me through. As half way passed I knew I was approaching the summit of the course, but the pace was just off the Parkrun pace the day before. This was not going to end well, but I dug in. I expected to see Rob on my shoulder at any moment. Then at just after 4 miles, the water station was offering cider. It was a dilemma and I crossed the road I few times on the run up to it. Eventually I gave in and stopped for a small cider.

Refreshed, it wasa time to push on. It was as good as downhill or flat to the finish from here, so I picked up the pace, the cider pushing a landmark time just ahead of me. I raced up the finish straight to cross the line just inside the time I wanted. the next job was not to throw up and get out of the finish walk as soon as possible. Seeing Rob finish focused me and I managed to walk out grabbing all our goodies as we went, Tracey running up to ensure we knew where they were. After reaching Sally, Tom and Tracey we were grateful to roar Allison up the finish straight.

For Rob this was the first bit of running bling in nearly 2 years and was augmented by a T-shirt, bananas, cookies and alcohol free beer. All happy with our times, we set off for the bigger challenge of getting the cars out of the car park, which was in a field where we had to wait for the last runner to finish before we could exit on to the road in single file – Spencer/Rob

Can’t say I was expecting much from a supposedly mass participation trail race, but this turned out to be a very pleasant run. That was probably helped by fewer than 500 of the 2000 entries actually showing up, but the start was still quite busy.

Once things spread out we got into the ups and downs that you expect from Cannock Chase and it was thoroughly enjoyable. I’m still not fully recovered from injuries, so I was taking things somewhat steady, and testing out some new gear. After about 4 miles my calf was feeling a bit tight, so I pulled the poles out and walked the rest of the way in.

Happy enough with how it went. Back to resting for a few days now; there are much more important races coming up over the next few months. 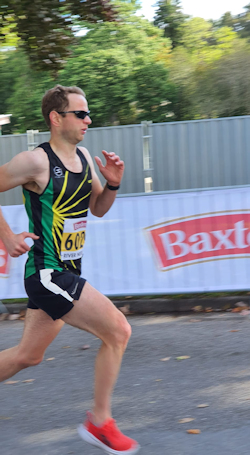 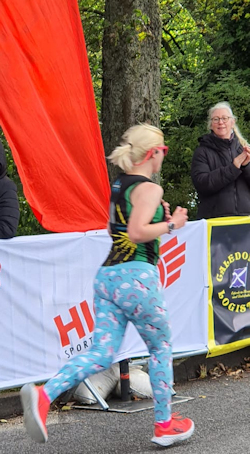 A fantastic atmosphere, and an aching blister from mile 16. It was a great event which hopefully I’ll be able to do again one day.

Garmin had a moment whilst in Canary Wharf hence the distance. Well done to all that took part & supported – Duncan

Before the main London Marathon race, a field of nearly 3000 runners ran the course in the reverse direction, having started at 2.00am. Spencer Davies had volunteered to be the official 5-hour pacer for this run.
Hats off to Damien Dear, who ran with Spencer’s group during the night and then he ran the main race in the other direction – incredible! 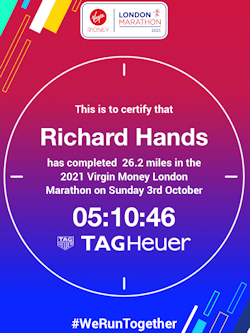 In a significantly depleted field (61 finishers) Tom and I did our best to represent Northbrook in the 2021 Rugby 10 Mile. There was a smattering of Coventry/Warwickshire clubs represented but the majority of the runners appeared to come from the the East Midlands (Wellingborough were particularly well represented).

Conditions were cool and windy but generally good for running. As usual Cart Hill was particularly challenging. The race was friendly and well organised, and no queues for the toilets was a bonus. Sally’s support was much appreciated – Rob

After failing to get into London (again), thought I’d do something different and combine it with a day out in Oxford. Nice flat course, with free parking at the start/finish. I was hoping to get under 40m, but just missed out, getting carried away at the start and running a far too fast 1st mile didn’t help.

Had a bloke chasing me down for the last 2 miles which helped keep my pace up. I was determined not to let him get past, and managed to finish 6 seconds ahead of him.