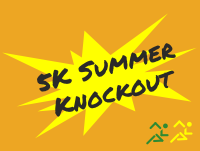 Here’s a 5k knockout competition with a twist.
Pairs are automatically generated by the Northbrook random bingo machine on a Facebook live draw.
Each couple in a pair has to run a 5K distance.
The 5k does not have to be run together or on the same course or the same day.
A week will be given for the pair to complete their runs, and each pair can make 2 attempts in the week to clock a time.
5k times are submitted through the Virtual Results upload form on the club website.
Pairs are drawn randomly against other pairs using the same Northbrook bingo machine on the same Facebook live draw to form a series of knockout matches.
For each pair in a match an aggregate time difference is established by comparing their submitted times with the times recorded on the virtual profiles board.
The winning pair in each match will be the pair that achieves the best time difference, and that pair will go through to the next round.
The competition proceeds until there is one winning pair.

Pair A goes through to the next round, knocking out Pair B.

In each succeeding round the time on the board for each runner is the time taken to complete the previous round.