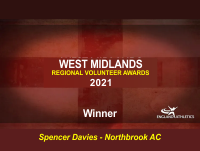 Award for Innovation in Athletics and Running
Winner – Spencer Davies

England Athletics Regional Volunteer Awards recognise and celebrate the unsung heroes of volunteers in the athletics and running community.

Winners of the West Midlands Regional Volunteer Awards were announced on 22 November, streamed live on the England Athletics YouTube channel – watch it here.

The development of a set of twelve virtual challenges, that then became actual, in-person activities as restrictions eased, are just part of how Spencer Davies has helped his club and fellow athletes survive lockdown in good physical and mental health. At first, he provided Strava segments and relay challenges with regular updates on social media, moving on to paired competitions and a virtual alternative to the club’s road race league. All this helped keep people connected and promoted a sense of competition when physical competitions could not be held.

Alongside this Spencer has been a calming influence when many have felt stressed and has continued to create a vital sense of camaraderie despite the need to maintain social distancing.

Regional Award winners will be put forward to an external panel for the chance to win one of the England Athletics prestigious National Volunteer Awards.