A 2 day festival of running in aid of Ben Smith’s 401 foundation, held in Portishead near Bristol. This year there were 4 races to make up a marathon distance – 5k, 10k, half marathon and a 6.1k to finish.

Saturday was lovely, Sunday we got soaked – Tony

Northbrook AC celebrated 40 years of running in 2018, and as part of our ruby anniversary celebrations we staged a special one-off event on Wednesday 15 August.

Twenty three teams of 3 runners from various training groups ran as many laps as possible of the Allesley Park 1000m loop in 40 minutes in repetitive relay order. The team with the most laps completed in the shortest time over 40 minutes was declared the winner.

There were a few last minute team changes, and one non-arrival, so there was one team of two people instead of three. Also one team had a 3.5 minute handicap, based on expected pace. All the teams completed 9, 10 or 11 laps, and everyone seemed to enjoy the
challenge.

Winners were Tom McNamara, Louise Slater and Raghbir Sangha and each received a prize of a bottle of wine. There were prizes too for the second and third teams.

Thanks to Mark Baker for organising the the event. 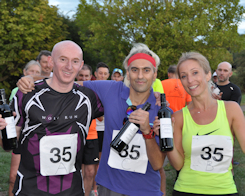 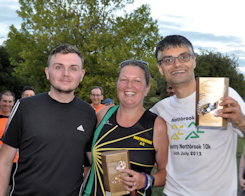 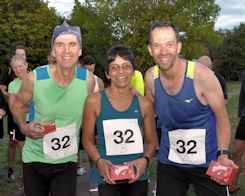 My first ever Parkrun outside of Coventry – I am now officially a tourist!
A really well organised event, and as you would expect in Germany, the distance was measured exactly at 5000 metres. There was a nasty climb at 3k- that’s my excuse anyway!

I consider my time of 26m 14s not too bad, after a few german beers the night before. 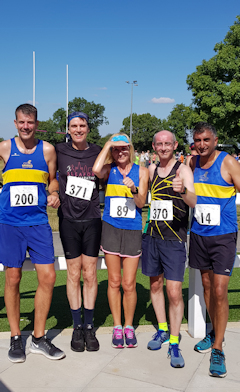 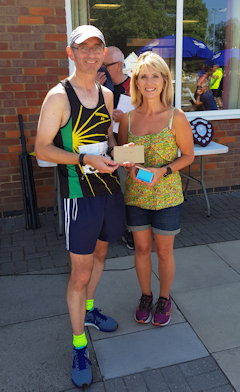 After knocking out a decent time at Stratford parkrun, I decided to try my luck at a hastily arranged 10k the following day. Tom Miller and I headed south on a roadtrip to the Bearbrook 10k on the outskirts of Aylesbury.

We set off with just over 300 others on a course billed as flat. The first 6k had a slight incline followed by a couple of small hills and then downhill for the last 3k where time could be recovered. With the heat, it was tougher than I expected, but both Tom and I recorded good times. We were surprised to see a few blue and gold vests from Sphinx to swap stories with.

We hung around afterwards for the prize-giving and I was both suprised and delighted when my name was called out for 1st MV40 – my first ever individual prize since the egg and spoon race at primary school. Result! – Terry

After ex-women’s captain Clare Rowntree came down to do the Northbrook 10k last month, we decided it would be nice to reciprocate (also my wife had never been to York). The York 10k was a relatively flat course, albeit one with enough twists and turns to cause you to lose your bearings. The higher latitude didn’t make it much cooler either. I was pretty happy with a second best-ever time of 37:26.

A special shout out to Clare for a 50 second PB (43:58, showing what she can do when she isn’t injured) and our mate James Grute on his first ever 10k, finishing in 58:54. Now to convince him to join Northbrook.

Liam and I headed to Nottingham Uni for a Friday night 10K. A bit of research showed us it could be hilly in places. A short warm up meant we missed the climb that was just round the corner. Bouyed by a smallish field and not many club vests in view we lined up, hopefully wanting good results.

Half a mile in and as I turned the corner from our warm up my heart sank, and the two-lap race became about getting around as the hills just kept coming. A great place for a run with lakes, a shaded trail area and a run through courtyards. A great effort by Liam who finished 3rd in his age group, having thundered down the finish straight. As for me, well I finished and was in one piece.

A well-organised event and worth another visit, now that we know about its elevations – Spencer