I’d been meaning to come along and try out this event for a while, and an unexpected change in the calendar meant this was my chance. It’s 4 laps round the short lap of Bedworth parkrun, but run in the opposite direction. 4 laps is not so bad, I set my mind to it being 4 reps. It’s low key, about 40 runners in total ranging from quickies down to walkers, so it caters for all. My time wasn’t the best ( I blame the heat and a few beverages the day before) but for a run out with a charitable donation it was well worth it.

Part of the Forestry 100 Running Series, commemorating 100 years of the Forestry Commission. Noted as “a hilly course for those looking for a challenge” – it was definitely hilly but the scenery was beautiful. A lovely wooden commemorative medal too.

Eight Northbrookers headed over to the charity Run for Nepal event in Nuneaton. The weather was warm and the 11am start quite frustratingly turned into a 11:45 start. Having had a few drinks the night before this was always going to be a drunken stumble for me. Once we finally got started the course was well laid out and well marshalled, a bit narrow at the start where we were dodging the fun runners to get into a rhythm.

Four miles in the alcohol was all sweated out and the run could start properly for me, and I loved the well-organised course. It was good to see so many of us out there, with quite a few from the training group doing really well – Spencer

Another brilliant turnout of 93 members and guests took part in our annual Club road relay event. Assembling at the start point in Hawkes Mill Lane each team of three was free to choose its own running order, some opting to send off their sprinters first others to setting off at a more relaxed pace in the hope of pulling it back on legs 2 and 3.

Bottles of wine were presented to the winning team of James Lacey, Tony Forde and Adam Brearley. The second team of Raghbir Sangha, Sarah McNaney and Marie Edmunds and the third placed team of Amanda Deavy, Pia Singh and Fern Kenny were given chocolates as prizes.
For full details of this unusual event go to the GBU page. 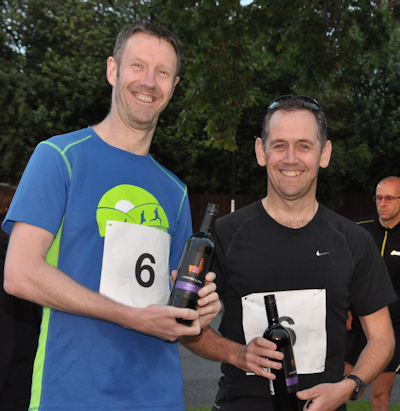 Town centre start and finish, road race round the country lanes which surround the market town of Chippenham. Reasonably flat course with a few small inclines and a downhill finish into the finish in the Market Place.

Ellie and I were the only two from Northbrook to run this 2-lap undulating course on paths and grass in Wollaton Park. It was very well organised and the atmosphere was amazing, definitely go again next year – Simon

The weather was kind to us in Wales; cool enough for running, windy enough to keep the midges away, and no rain. As hilly as you’d expect of a trail race in Snowdonia, in the gorgeous surroundings of the National Park with trees, rivers and waterfalls keeping us company. We slogged up the hills and hurtled down them and finished with a huge smile and a hearty sigh of relief.

Despite a course personal worst for me, I managed 1st in category!
Lovely conditions, pretty course, and well organised as ever.

A long kept secret for Mark was that he would be undertaking a Wolf Run for his 40th birthday present. A better kept secret (until they pulled into the car park) was that a group of close friends was going to be joining him. Mark found out half-way through a bottle of whisky the night before. As they pulled up he looked like he had still been drinking it. The weather was not the best but as we were going to get wet and muddy the rain did not matter.

I’d been allowed to choose my own clothes and had not thought it through. Pinning the number on the front of my costume was going to be a problem. After a much needed warm up we realised we had
all grown beards in honour of Mark, then the reality of mud and cold water hit a few of us. Fears were faced, there was laughter, there was mud throwing, there was swimming and crawling through unthinkable mud. But through it all we were a team, strong characters helping those that needed the help, laughing all the way round.

The team was the important factor and what a great way to spend an afternoon with a great group of friends. A special mention has to go to the supporters who stood around in the cold and rain for 3 hours while we “adventured”. Well done all – Spencer

This was the first time I had ever done an Obstacle Course Race. I was part of a work team raising funds for the ‘Mind’ charity. These races are very popular with 6000 entries. Our ‘Wolf Pack’ were given a start slot at lunchtime, on a very hot day at Stanford Hall in Leicestershire.

The event is not timed for results but we completed the course in about 2h 50m. Our pack planned to work together on the course and help each other around.

There’s a compulsory warmup, then we were off on the 10k route through fields and woods. Within 10 seconds we were wet, jumping straight into a stream. Water and mud were to be a common feature. I don’t have very strong arms, but with help, I attempted every obstacle; some more successfully than others.

The obstacles test strength, courage and teamwork. There were climbing walls, cargo nets, pipe crawls, water slides, mud pits and river swims. There was an exhilarating head first water slide, and a mud pit where I got stuck for a while at halfway. I had to roll through the mud in the end, with some
help from the team. There was a river dive under a pontoon where I couldn’t see anything. On the river exit,  someone fell back and we were under water again for a few seconds. Shortly afterwards, a
pipe crawl had a head first exit into the river, for a swim to the other side. Some of the wall climbs had very small footholds and my arms were soon tired from the effort hanging on.

We were out a long time. We got completely soaked and covered in mud. The best news was that we all finished – just about in one piece. After the final water slide we got a team photo in the river then ran to the finish. One more challenge was the cold hosepipes to get cleaned up, but fortunately
it was still a hot day.

It was great to run a 10k with a difference, and face a completely new challenge – Mark Baker

This was a multi-terrain/trail race around the grounds of Chillington Hall which is on the Staffordshire/Shropshire border. At the same time there was a half-marathon going on and in the race info it stated the routes are as close to the usual 13.1 miles and 10km distances as they could get them. We were instructed at the start that there was a split in the race at about 6 miles which is where the half-marathon runners do another loop. Once I passed the 6 mile point I started to panic thinking I’d missed the sign – fortunately I hadn’t, it was just an extra long 10km race!

The distance I clocked crossing the finish line was 7 miles (not sure that’s close to 10km). Nevertheless, it was a fantastic race and some spectacular views of the Chillington Estate – a race I would definitely do again.

Twenty-two Northbrookers headed to the little village of Tysoe for the annual windmill run. This event has 2 distances, a 10K and a 5K. It’s not flat (635ft on the 10k) and with the sun burning down on us all it was never going to be fast. Everyone seemed jovial before the start, some had done it before, some were new to the event and we all got off safely.

Craig, as usual, was first after 200 mtrs, before the hills caught him. The climb to the windmill through the fields is unforgiving, and positions started to sort themselves out. The 5k girls had to climb to the windmill before descending straight back down and to the finish. For the 10K, get over the top and take the stairs down (yes that steep that stairs are cut into the hill) before you hit a miles worth of tarmac climb.

Everyone at this point was melting from the baking of the sun, Martin was dragging me and
Damien was having a friendly rivalry battle for 2nd. Then the climb continued through more field, but this was the top, higher than the initial windmill climb and you could see downhills from here. A little tumble in the field didn’t stop me, but the water station(s) did. Martin pulled away and I opted for the life giving water. The downhills were fast before we plummeted down past the windmill again back onto the km on tarmac and back through the field.

A great race and some amazing finishes, even if one of us did rugby tackle a random junior in an attempt to not be beaten by him. This is a great event, friendly and well organised and I thoroughly recommend it – Spencer