Sarah and Corinna made a lovely couple as they crossed the line holding hands.

Early on a cold day in the centre of Stratford saw 21 Northbrookers resist the London urge to tackle the Shakespeare half or full marathons. A familiar course to some, others looking for times, some setting out on their first attempt at this distance meant nerves were a plenty. The families supporting were weighed down with our discarded hoodies as we joined the thousands on the start line. Once we had negotiated the crowds we settled down to our own paces. The sunbursts were spread through the field and gave us plenty to look out for.

Winch set the pace with a blistering first lap (Pharoah could not catch him), and the full marathoners turned left for the 2nd lap. For me 2.5 miles of greenway was enough and I did not look left once. As the finish approached I was looking for the sunbursts chasing me. I was clear, Pete drove me from his finished support position, then the remaining half-marathoners followed us in.

Then we eagerly awaited our full marathon heroes. Winch was still on fire and set a blistering time. McHugh followed, pb achieved, then came the experienced Mark and Pete. Sarah was emotional, Liz looked as fresh as a daisy, Mark Parker was exhausted and Craig looked broken.

With all home safely the partying started. Then we discovered the full team had won first place prize. The sunbursts blazed again. Well done all – Spencer 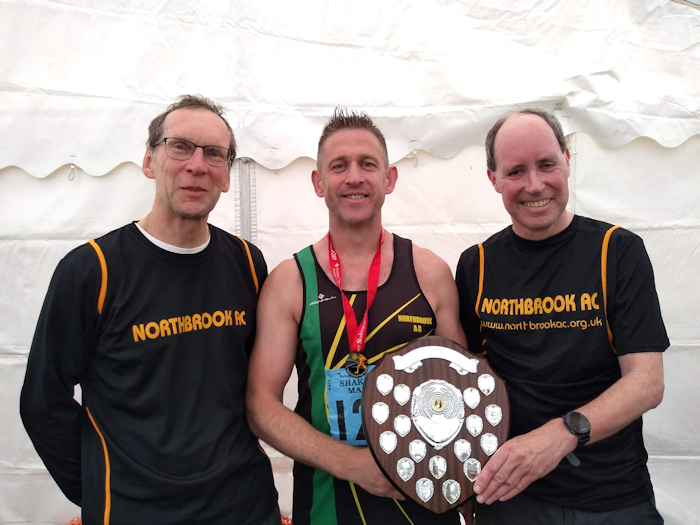 Part of a series of Chase the Sun races organised by Runthrough and using the London parks. This race was at Brockwell Park in Brixton, a great course – definitely not flat but well organised and a fab medal. Would definitely recommend.

Stuart trounced the field in winning by 5 minutes.

Hapalua: the Honolulu Half Marathon – 14 April

672nd out of a field of approx 7000! This was a real bucket-list race for me. We had a 6am start to avoid the heat, but still it was 74 degrees by then. The route was flat for 9 miles around Waikiki Beach and downtown Honolulu, and then included a short hilly section around the base of Diamond Head – an extinct volcano – before a lovely downhill finish.

I rewarded myself at the end with a dip in the Pacific Ocean; the perfect recovery for those aching legs.

Sunday morning saw the two of us and a supporter head over to a “new find” – a trail 10k race at Walton Hall. The venue was spectacular and we nearly decided to join the residents for breakfast rather than do the run. But the run won.

It was a low key event and the course was fantastic, loads of trail and loads of road meant we were never bored. As the race set off the eventual winners headed into the distance rather quickly, and everything settled down to a fairly decent pace while climbing the hills. Coming back down to the hill was a bit of an ankle breaker if you were not careful, but I could pick it back up when we hit the road. We crossed a small stream and then, finding an incline at 4.5 miles, I was taken by surprise and dropped a place. But then the remainder of the course was flat and downhill, so the legs got going again.

It was a cold fine morning as we set off for a trip “oop North” for a run round the old colliery site. 5 mile loops on mixed terrain; fairly firm underfoot and somewhat undulating, including a 35m sharp uphill that got you to a lovely viewpoint.

Katherine and Claudie jointly won the third female prize for the 20 miler despite Claudie taking a tumble, and I managed a 10 mile PB. Good bling too – Chris

Perfect conditions for an amazing Marathon in Manchester. Nice flat course and the support was unbelievable, which definitely played a massive part in helping to get me around the course. A well organised event with plenty of water and toilet stops, a beast of a finisher’s medal and some malt loaf across the finish line, all washed down with a free pint of Erdinger!

Amazing achievements all around with PBs smashed all over the shop. It was an absolutely incredible experience and I would thoroughly recommend it to everyone. Both Liam and I couldn’t be more thankful for all the support the Northbrook community has offered along the way too.

A very pleasant one lap 5 mile club race round quiet country lanes north of Swindon. The first four miles were flat/slightly downhill but this was more than made up for by the big hill at mile 4.

A very friendly race in good running conditions, and Sally was awarded a nice little trophy for winning her age group – Rob

With so many local events on it was always going to be a reduced turnout for the last race in the Grand Prix series. We still managed to have 12 sunbursts out on the day and (despite 3 having made the trek straight from the Regency 10K finish line) there was great running from all of us.

A beautiful day for the Regency 10k. A field full of Northbrookers (those not bonkers enough for A Coventry Way) and excellent support from the good people of Leamington Spa throughout the second half of the race. I for one will be back – Chris

I started with Claudie, no commitments to stick together but we leapfrogged till 30 miles after which I slowed down. I couldn’t keep up after that. Really enjoyed the company, it helped enormously (I entered with my sister who is a similar pace to me, slight stronger and faster at the moment but that’ll change soon).

I’d have been pleased with 8:40 then realised I could do 8:00 and the final result was 7:50 so I’m a happy bunny. The conditions were perfect this year, the cakes always lovely (I recommend the scones at Wolston). My glove was covered in sweat and then butter and jam, but so worth it – Lisa

A two-lap course around the Druridge Bay Country Park that includes a run along the beach and sand dunes, passing the large freshwater lakes and surrounding meadows and a section through woodland. The route includes some closed roads, sand and trails and it is predominantly flat.

30 glorious miles in the the beauty of the western Peak District, 5000ft of ascent traversing The Roaches and Shutlingsloe Hill.

The 80K is the flagship event of the Shropshire Way 80K Festival which also includes a 3.5k fun run, a 10K and a marathon. It comprised 8500 feet of climbing through the beautiful Shropshire Hills including Ragleth Hill, the Long Mynd, Offa’s Dyke and Devil’s Chair as well as visiting some beautiful little market towns. The feed stations were stocked with very tasty local produce.

This really was a wonderful event.