Eleven Northbrook runners donned their headtorches for the Gato Headtorch 10k, a 7pm fast and flat twice out and back night race along a disused railway line in Rugby.

Damien Dear came in second, there were a few PB’s and a splendid night was had by all. Soup recommended – Chris

Sixteen Northbrookers and a large support crew set off to “The North” for the National Cross-Country Championships, the last hurrah of the cross-country season, and what a spectacle we were treated to. I always say that if you are ever going to do a race, this is the one. We set up camp at the top of the first climb, the women studying the various course layouts in preparation.

One woman just made it by the skin of her teeth, her commitment witnessed by her getting changed as we charged her across the tentage field to the start. She made it just in time before they set off. The women’s field seemed to go on forever, from where we were positioned we could see them tackling their course.

The men looked worried as none of the course we had seen covered so far climbed to the top of the distant hill, and the taped course that bought the runners back up the hill the second time per lap had not been used. The strength of the fields was what we expected, but our women were awesome.
They came, they ran and they conquered. 110th best club in the country, now that’s a result.

The returning women, cursing and exhausted, again sent worries through the men. After watching Tom’s exhaustive warm up stretches it was the men’s turn. There were over 2000 taking part. The hairs on the arms were standing up,. There were so many men at the bottom of the hill we started off 200 wide and 10 deep. At the top of the first hill 400 mtrs away it was still 10 wide at best. This was going to be fast, it was going to be furious and no quarter was given.

The gun went off, the ground shook, the steam coming off the men was blotting out the top of
the hill. I let them get on with it, experience told me it would be a stop start race for the first half-mile as space was needed. Then came the hills. The course was dry, it was good underfoot and it was warm, but it felt like we were climbing into the sky. Then we dropped to the bottom of the valley before they put us back up it. There is a sadistic course designer out somewhere, there but it was great. The men did awesomely well. We beat local clubs and ended up 65th best club in the Nationals.

Yes it was a long way to travel, yes it was very fast, but we held our heads up high. Our supporters were heard above everyone else, and they gave our legs, lungs and hearts that extra push, and after the shock of what we had just completed the smiles were the biggest we had ever seen.

Now let’s have a celebration – Spencer 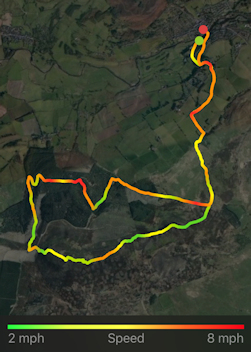 A night time head torch trail 10-miler up and around the Simonside Hills in the National Park, ie proper countryside/wilderness. The first and last quarters were like the Mayhill Massacre, the middle
two were like climbing Scafell Pike, but all done in the dark. Single file up rock ‘steps’ that twisted and turned. Up and up. I’m sure the views would have been amazing but it was dark and all we could see were dots of light from torches.

We made the mistake of wearing chest torches. Much better light but useless coming downhill as we couldn’t see our feet. We also couldn’t run on the descent as again it was single file rock steps plus loose scree. Only the last three miles were runable.

It was interesting and different but we wouldn’t do again. It wasn’t really a run and at times it was verging on dangerous. For anyone lost or injured it would have been a helicopter search and rescue mission. On the upside, it was really well organised, with plenty of signs and marshalls.

The finish line was across the threshold of a cafe so you had to storm in; woe betide anyone standing in the way.

Series Results – from all 5 races

Nine Northbrookers headed to Ilmington for the last in the Winter Race series. After the Northbrook Awards Night celebrations the night before some were feeling a lot worse than others but all had one aim. Climb the hill for the last time in the series, get round, earn the hoody and the sausages and work off the hangovers.

The weather was a lot better than I felt on the day. I watched as Natasha, Tony, Cath, Claudie and Rich disappeared into the distance. I knew what I had to do and part of the plan was to keep the awards beers from swishing around and to stay down. As the race progressed the beers started to sweat out. Not the best time around but job done.

Natasha won the series for the women, Julie was 3rd FV55, Tony was our lead man back and we all sat there afterwards in the pub wearing our new hoodies and dreaming of the impending sausage sandwiches we had earned – Spencer

A lovely 51 mile circular route through the undulating countryside of North Norfolk with excellent, well-stocked aid stations which is par for the course for LDWA events.

It’s been fantastic to see Team Northbrook out in strength over the 2018/19 cross-country season. As a team we stayed solidly mid division to the end, and 3 consistently strong performances from Natasha White were rewarded with a 3rd place finish in the Masters individual competition.
Division 2 had a total of 979 finishers, started with 26 overall teams and 24 masters teams, and concluded with 21 and 18 respectively – Cath

Twenty-eight men and women took the very long 80-mile journey down to Cattle Country, Gloucestershire for the last Birmingham League/Midland Women’s League races of the season. With diminished teams due to the location, illness and injuries we always knew we were going to have to give it more than our best. It was cold, wet and windy and the course had been changed to take account of the newly formed lakes, and the farmer had also helped by recently muck spreading.

This did not stop the women though who ensured that they cut up the course superbly for the men. Natasha led the women home with great smiles (relief or enjoyment) by all. Then the men started. The field, although reduced in numbers, was just as fast as we have come to expect. Oli carefully picked off the competition as he led us home through the knee-deep water and slurry pits. The rest of us were doing our best to keep up with him. Every man and woman left pride, lungs and heart out on the water-logged fields of Cattle Country.

There was great support and many photos were taken on the day in cold conditions. We will be back next year; can consistency be the key to promotion? – Spencer

Big Bear Challenge is a 6 hour running event at Ryton Pools Country Park. The 3.3-mile out and back loop means the race can be just over 5k or, given the relatively flat nature of the course, potentially 49.5 miles. Athletes decide how many laps to do within the 6-hour time limit. For a marathon distance you need to complete 8 laps (26.4 miles) and for a half marathon 4 laps (13.2 miles). Paul completed 9 laps, meaning he ran 29.7 miles.

Fourteen Northbrookers headed up the road to Chelmsley Wood for the 4th
5 mile race in the Centurion Grand Prix series. The cold weather told on the
number of participants. Natasha (1st female) and Mike (1st MV45) led us home
with the rest of us keeping the sunburst pushing over the line.

Great support
as always on a well organised event, and the post-race raffle and hot drinks
were much appreciated – Spencer

Four of us set off early doors for the Mayhill Massacre, a race that none of us had done before so we were all nervous but excited as well. This was a low key (154 entrants) event based at the bottom of the Mayhill in a garden centre, which meant a nice café, nice toilets and heat. Yes, there was snow outside and the sledge offered at registration should have warned us of the fun we were about to have. My decision of shorts and vest felt wrong while we were waiting to start, but once we started I knew I had made the right decision.

Two miles of constant uphill started us off, we then traversed the peak in snowy conditions, glorious sunshine and with fantastic views. This race had everything from knee deep, shoe-sucking mud, through lung bursting climbs, to flat out descents. It was brilliant. Out of the 4 of us Craig was the only one not to get lost, anyone betting on that would have lost a fortune.

Thoroughly recommend it for next year – Spencer