A lovely day to go off for your last run of the year in a green and pleasant valley right in the middle of the West Midlands conurbation. The 5-mile undulating multi-terrain course was a bit muddy in places, which added to the fun for a small field of 87 runners, of which I was the only starburst representative.

This event probably wasn’t a good choice for my first trail race, however I really enjoyed it after I got over the shock. The crazy uphill wasn’t too bad as you’re all scrambling up in a single file at a slow pace. The crazy downhill was more terrifying for me, but I managed to only slip fully over once!
The scenery was gorgeous, and it was a really fun, muddy run. Will probably do it again next year with a bit more experience and a foggy memory of the horrible hills!

Fourteen Northbrookers headed to Stoneleigh on a cold and frosty morning looking forward to a run around the showground. Between us we were entered into 3 different race distances, that much we knew. The course was billed as multi-terrain, which was tarmac, rough tarmac and a muddy/stony trail. I’ve run on worse surfaces on some road races. Good job we all went with road shoes.

What became apparent shortly after setting off was that no-one knew who else was running each different distance. Was the really fast guy running a 5km? And how come the results showed a 27 minute 10K finisher? What became even more apparent was that the organisers really messed up the course. I passed Sarah (doing 5k) at 5k, with another mile to go at least if she was going to finish at the finish. The 10k turned out to be 11k and then, while we were complaining, the organiser moved a race point, so some ran under 10K and most of us ran over 11K. Positions and times are questionable and apologies could not make up for the farce that this race was. But we all smiled, and finished and brought a burst of sun to our huddled group at the end.

We did have 2 podium places, as we think Craig was 2nd, and Sarah was first female, but presentations were put on hold as the organiser was stressed and struggling to work out who was in which distance – Spencer 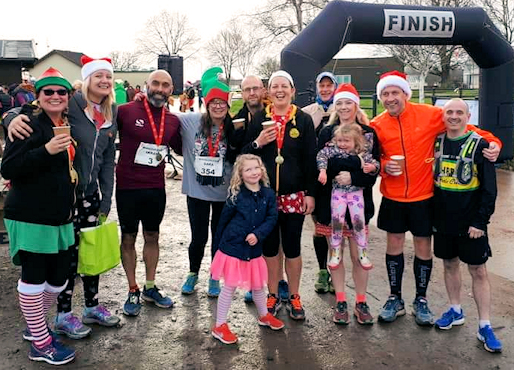 I took part in the “Vrouwen sen/mas Lange cross 6850 m”, 4 miles exactly on my watch. Just like the UK, the men ran a different distance, but as the numbers were smaller we ran at the same time. Time on my watch was 32:06.

Thirteen Northbrookers headed to Sneyd’s pudding run. With the hope of more than a Christmas pudding and resembling the walking wounded beforehand with niggles, tape and injuries all being advertised as pre-race excuses, we were all keen to see what we could do. It’s a 5 mile loop that the 10 milers run twice.

Sarah took the option of 5 miles sensing more points available for that distance and recorded a PB. There was a lot of surface water but we soon settled into our own battles. The Robbins/McHugh battle took another twist with Paul resoundingly beating Martin. Is this a turning point? Rich was pushed for 1 lap by Gemma, I was dragged by Craig who ensured I knew I was running.

Four runners flew the Northbrook flag at the Lanzarote International Marathon. This event is held annually in December in Costa Teguise, over two days.On Friday it’s the children’s races and Saturday is marathon day, along with a half-marathon and 10k run. The marathon is run on on an out and back course with the half way turn around atPuerto del Carmen. The half-marathon and 10k runners are transported out to their start points and all finish back at Costa Teguise. There are plenty of aid stations with water, fresh fruit and cola along the route. We had a hot, sunny run along the coast road, which is billed as flat and fast but the final 10k was lumpy, along with the infamous Lanzarote headwind it made for a tough final leg.
A bright technical tee, a great swag bag and we all earned the bling – Mark

Nineteen Northbrookers headed over to the increasingly popular Centurion 5-mile Grand Prix series. The weather was dry but one side of the course had a strong headwind which did take some pushing through. Eight of us still had the previous days cross-country in our legs to add to the challenge. But we were up for it, Natasha leading us home and showing the field how to run in becoming 1st female home.

The positions for the month were splattered with Northbrook names and at least 1 pb recorded. A great sunburst turn out for a great local and friendly event – Spencer