Thunder Run 2018 came round with plenty of new faces and sweltering temperatures. The excitement for the event was unbelieveable and what an event we had. One of the best in our history, with two teams that put everything out there.

An upgrade for the event by the organisers meant live singers, on and off course and even a drum band on the run in. We partied hard on the Friday night, ran even harder on the event and finished in amazing positions. The stories are plenty, the experience was unbelieveable. 13 thunder runners and just as many support crew that kept us rolling. Great event with great company.

In total every runner at TR24 2018 meant the event ran the distance of twice around the world. Who would not want to be a part of that? – Spencer 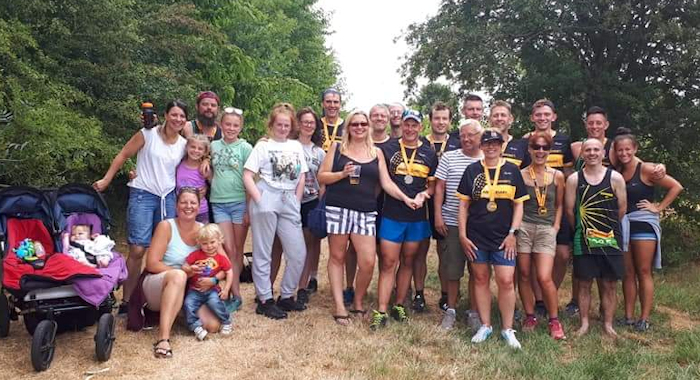 The lack of rainfall over the previous few weeks hadn’t halted the growth of the nettles, brambles and other foot-grabbing undergrowth lining the route of the annual Race the Train event. Sixty members and guests took the delayed 7.18pm train from Tile Hill station to Hampton-in-Arden and then took the short walk to the start in Fentham Road.

The first mile or so was easy running on a downhill and then flat mainly paved roadway. After crossing the A452 the route then started to get interesting, with a couple of stubble fields, a stile, a root-strewn path the through the wood, more stubble and then the bouncy boardwalk along to the the church in Berkswell.

The second section from Berkswell to Tile Hill was an altogether trickier affair. Here the overgrown, concrete-hard, ankle-turning paths, combined with an abundance of juicy nettles, appeared to present something of a challenge those not very used to off-road running, and at times the peloton was reduced to walking. Some navigational head-scratching at the infamous four-way junction provided an additional intellectual challenge.

With many first-timers who were unsure of the route, and using the excuse that he would be running as part of a 5-person team at the Thunder Run the following weekend, Spencer very gallantly dropped to the back to make sure everyone got back home safely. There were a couple of minor mishaps further up the field but none that required more than self-administered first aid.

The delay to the train on the way out meant that after starting the race Bob had to dash to catch the train back to Tile Hill (no speech then) ready to welcome the runners home and record the results, although the times are probably pretty meaningless to most – RL

For complete race results go to our Northbrook 10k website

7am was an early start but well worth it. Eight Northbrookers were up bright and early to do the 7am 7km event. It was busy, over 300 runners, and the sun was out even then. Not quite as warm as it had been and at least there were some shaded patches around the route.

Great event, even if it is a weird distance – Spencer