Five of us headed over to a cold and damp Abbey Park. The course looked good, all tarmac, a bit loopy, cool and drizzle setting in over the duration of the event. It was busy, over 1400 runners. The only complaint being the position that some people started at, this meant the start was a bit “jumpy” between groups. But after 600 mtrs it started to open up and the legs could start turning. At this point Jamie who started on the front line was still running in fear of the masses behind him! After that everything flowed, great running from all 5 of us showing the sunburst off to its full potential. Andy found the conditions a bit wet and cold, brrrrrr – Spencer 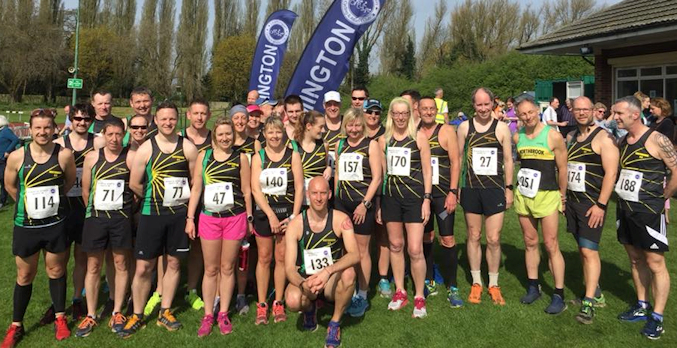 A very, very flat course which was along mostly rural roads. Beautiful conditions
for it. Missed out on my target but a PB all the same!

Bumpier than advertised, I was content with (just!) under 2:30 for my second half in eight days.

This was my first ultra, and my first race since the Amsterdam half-marathon in October 2015. I’ve had a rubbish two years running-wise, but I thought this would give me some inspiration.

I’d done a few recce’s in the previous months and I’d run up to 20 miles, but I knew I’d be running with walking. The ground was officially ‘the worst for many a year’ – after the snow and rain there was a lot more mud than usual (there were two flood diversions which were only lifted the day before).

It was fun – in a way. I ran with my sister; we just got on and did it. Two small detours put on a little bit of extra distance (not much) and 10 minutes getting back on track. We also spent 45 minutes at the various checkpoints – we’d cut that right back in future.

The race was really well organized, every one was friendly and the food at checkpoints was great. Will do again – Lisa

This was the final trip over to Chelmsley Wood for the 2017/18 Centurion RC 5 Mile Grand Prix, a series of 6 races held between November and April each year. As a newcomer to the event, tempted over by the prospect of an early season 5 miler, I was expecting a pretty basic affair if the bargain basement entry fee (£5 in advance; £6 on the day) was anything to go by. My low expectations immediately evaporated upon arrival however as the organisation, facilities and overall experience was first rate.

Northbrook fielded a strong presence, with 11 senior runners along with supporters and junior 2k runners. After assembling for a seamless registration at Newman College on an overcast morning, it was then a short warm-up jog of just under a mile down to the start line in Babbs Mill park. Hoodies were cast onto the branches of a nearby tree and the race started shortly after 11am. The terrain was varied enough for a ‘tarmac tart’ such as me (thanks for the moniker Rob Barry) with it being pretty much 50:50 gravel path and tarmac surface. The profile was essentially flat too earning it further bonus points, with the out and back routes relatively close allowing the much-appreciated supporters to cheer us on twice each lap from one position.

Two and a half laps later and there was a short trot of approx. 10m across the grass to the finish line, which is enough cross-country for me thank-you. Conditions were clearly optimal as four PB’s resulted and all Northbrookers fielded good times.

It was then back to the college for coffee and a natter where awards were dealt out for the individual race and series. Julie Cozens picked up an award for 3rd FV55 – well done! After a raffle in which Louise Myers won a belated Easter egg, which I’m sure will keep for next year, it was time to head back to Coventry for lunch.

Following the cancellation of Coventry half which was due to be my first go at the half-marathon distance, I signed up for the “undulating” Solihull half a few weeks later. With the added extra bonus of limited road closures meaning that wondering which 4×4 wing mirror was going to nudge me into the hedge kept my mind off the longest distance I’ve attempted, I’m pleased to report that my elbows and I survived in a time that I’m content with as a first assay into the world of the half.

Old style medal means I’m now installed as the Lord Mayor of Solihull, despite the run not troubling the town at any point.

Lucinda’s aim was to get inside the London Marathon qualifying time of 3h 45m. Despite some problems with cramp in the last few miles she comfortably achieved this with her 3h 37m 05s time.

Another rescheduled half, over the undulating Warwickshire countryside. A good test for the legs with some lovely support throughout the race. Disappointed not to get a PB but the hills proved too much on this occasion – David