The inaugural staging of this event and 9677 finishers 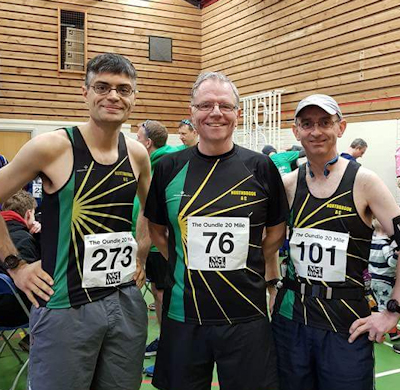 This is a new race, organised by “Nice Work” and it’s definitely one for the race calendar, just an hours drive along the A14 into rural Northants. The course follows a scenic route through the gently undulating, wide, quiet country lanes in and around the pretty Norhamptonshire villages of Fotheringay, Nassington, Yarwell and King’s Cliffe.

There was one long 2-mile hill at about 9 miles but the race produced excellent times for both Steve and Terry in their first 20 mile races.

With a field of just over 200 the race had been re-scheduled from a snowed off 4th March.  It will be bigger next year I’m sure – Kevin

The Cleevewold is a tough and hilly 14 mile multi-terrain race held annually in March. The race starts near to race HQ at the medieval Postlip tithe barn and covers the highest points of the Cotswold hills on Cleeve common, before heading into the countryside and returning to Postlip via the Belas Knap neolithic burial mound. 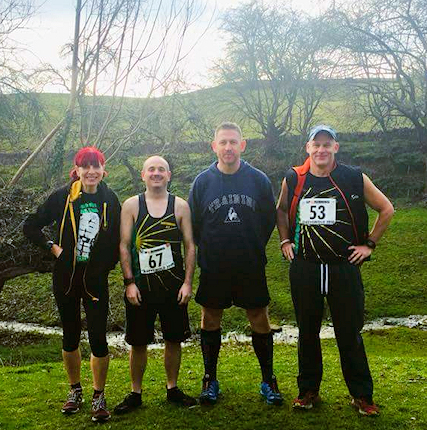 There were four of us this year for the annual trip down to Cleevewold. The weather was glorious and the views made up for the pain through the legs. This is never an easy event but it’s one I never like to miss as it really tests you. Craig’s marathon training proved and resulted in him leading us home, slightly soggier underfoot than I anticipated which meant wet feet and quads like stone the day after.

Overall a great event as always, excellent running right through the ranks – Spencer

The third weekend of March is supposed to be about the start of spring, or so I thought. So, when I agreed with a friend from South Africa to go down to Hastings to do their half-marathon (and in so doing, miss out on Cov Half) I didn’t expect to be fretting about whether the event would actually take place! As it turned out, Cov Half was cancelled due to the unseasonably cold “Mini-Beast from the East”, whilst Hastings, nestled on the south coast and escaping the worst of the ice and snow, survived.

The course itself could be summarised as 4 parts – a series of bruising climbs up from the seafront, some undulations in the middle, a lovely downhill back down to the promenade and a sprint along the seafront to the finish. My Garmin says I recorded an all-time 5km “PB” of 17:43 towards the end of this race! So much for pacing…

Not the Coventry Half-Marathon – 18 March

Claudie and I ran some bonus miles due to navigational issues, so we ran 15.5 miles in 2.5 hours. I don’t know how everybody else got on – Amy

55 miles in the North Yorkshire Moors in sub-zero temperatures, 45mph winds and intermittent hail and snow. The event achieved some notoriety in the media with (false) reports of numerous hypothermic runners requiring rescue by the Cleveland Mountain Rescue.

With cold weather predicted and a battle to fill the teams due to a busy calendar (every other race got cancelled) 30 Northbrookers and supporters headed to Sutton Park. As usual the competition was fierce, but noticeably fewer teams in attendance (probably due to the busy local calendar planned for the weekend). Each runner threw everything they could at this and with conditions varying, during and from one leg to another, it meant everyone effectively ran a different race.

A special mention has to go to those on the mass start and the later legs. The weather turned bad and they persevered through what looked like some sort of icy hell to ensure that all the teams finished. Despite the weather it was a fantastic effort from all involved. Well done guys and girls – Spencer 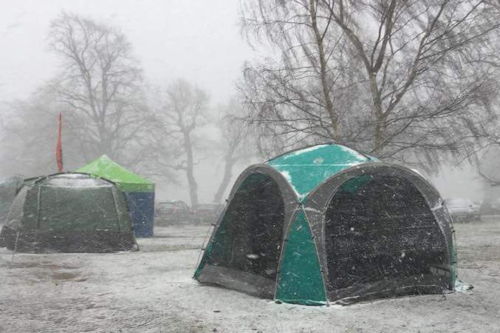 “I am just going outside and may be some time”

An 8-mile self navigation race, following an 8-mile social/guided run around the route.
The Le Mans style start means that the time includes the time taken to put on shoes and remove prior to finish line within an indoor venue. Mud and blizzards added to the challenge.

A colder than expected day greeted the two of us we headed up to Fradley with an overcast sky at the start. I was warned that it was flat and fast, and everything felt right on the day to be able to turn up and have a good run. 2 laps followed of a true to say flat course but with enough turns on it to keep us entertained. As usual
I went of too fast then hung on for dear life in the last 1km. I didn’t even have enough left for the sprint as a young lad came powering past me at the end, next time I’ll have him.

A PB for me was achieved, and for Rich, coming out of long slow half-marathon training, all the signs are there for something special to develop over this year. Great race, great course, great organisation and great company – Spencer

The 20-mile course was two laps of relatively flat country lanes but with a little twist of several sections of road under water; all that cross-country training came into its own. The finish line was only accessible through
another flooded lane but at least there was cake at the end, and the tee-shirts are nice – Sally