Massey Ferguson staged their New Year Pace Race on New Year’s Eve this year (much better) at the War Memorial Park. A race with a difference, runners had to predict their time to complete the 3.55 mile course with no time or pace aids and try to finish in that time or as close to it as possible. The winner was not the first over the line but the runner who got closest to their predicted time.
Having checked with Spencer and Jill at the start line their predicted time, Jill & I decided to join forces and pace each other round. We let Spencer run into the distance as we set our steady pace, cruising to the finish, no sprint required! Not long after the finish we had the results and Jill was awarded the Female runner-up trophy, finishing 5 seconds after her predicted time. She was only 1 second off the winner! No trophy but a notable 3rd place to Tracey Cox with Claudie and Julie very close behind. I was elated to finish within 1 second of my predicted time (the one in my head at the start line), shame my submitted time was 10 seconds slower! No trophy but happy with 3rd male, 5 seconds off the winning male, and 3 off the runner-up – Simon 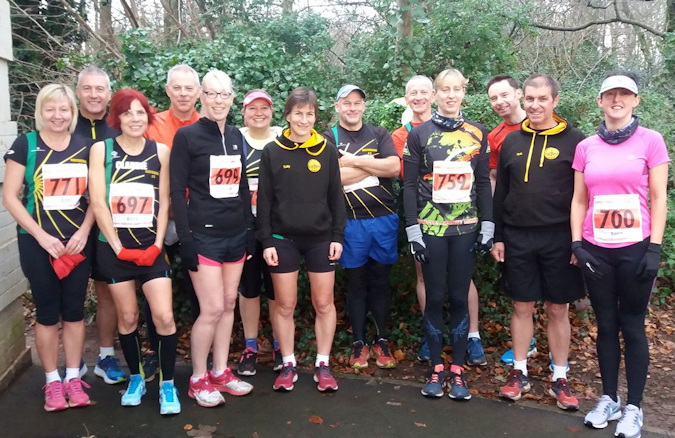 This was a 7 mile event sold as 7miles,7 hills. There was an added bonus of a river crossing and water tunnels to cross that were thigh deep. With the temperature at -4°C they were kind enough to have broken the ice for us. This was tough, no place to get any rhythm going and the hills were not runable by me on both the up and the down. Sticky mud that sucked your trainers and caused you to fall with the rutted ice at the top meant it was hard work. But hopefully I’ll be back.

Run as many laps as you can on a 1km cycle track in Shrewsbury between sunrise
and sunset. Breaking it down into 10 lap chunks helped pass the time.

Having had races cancelled over the last few weeks I resorted to a train journey to the big smoke. It paid off with a PB on what was a more undulating course than I had imagined it would be but not so much that it had big effects on pace. 6.2 laps around a pristine tarmac 1 mile cycling course with a fair bit of weaving in and out of runners. But I wanted a PB and I got one. That’s me done until 2018. Merry Christmas to all at the club!

17 Northbrookers headed over to Chelmsley Wood for what is becoming a very popular event for us. Five miles in good conditions, and excitement was evident though for the eight of us who battled at Stratford the day before the talk was about aching and tired legs. Andy soon set the lead and knocked
out a fantastic PB. Every one ran well and some great battles between the pockets of Northbrookers made fascinating viewing and kept the mind off the job in hand. Great race, great event and worth trying folks – Spencer