19 Northbrookers headed out on a cold day to Coombe Abbey for the annual Coombe 8 multi-terrain event. After a slight delay due to parking issues everyone huddled together for warmth before being released. Everyone went of fast (to warm up I guess) and soon settled into a pace. There was the usual hurdling of fences and the run through the river to contend with before the craters in the last mile took the last remnants of strength from the legs.

Great runs from everyone in very cold conditions, and there were quite a few tumbles from not just our own club but from others as a few of the trails/wooden bridges were slippery and not expected.

Great support from families and colleagues all around kept us going to the end. As usual this was organised really well and we can recommend it for anyone who wants to run it next year – Spencer 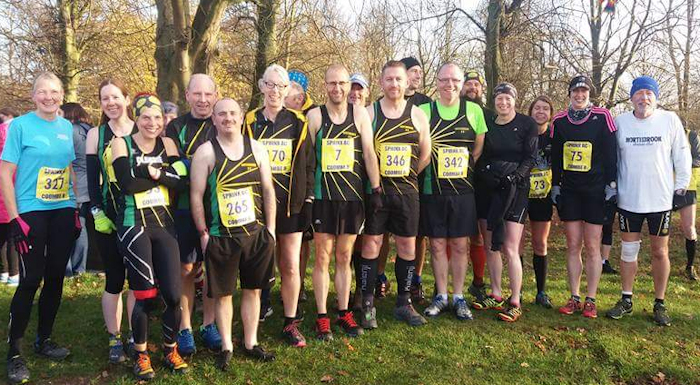 50 miles consisting of 5 x 10 mile loops on beautiful forest trails with 9500 ft of elevation. Definitely
one of the nicest trail courses I’ve done.

Four Northbrookers, 1 marshal and a small cheer squad headed over for Race 2 of the series. Race conditions were very good with no wind, and being cool and bright meant you could see the hill more clearly. The course was run the opposite way round this time which meant longer was spent climbing.

Despite 2 of us doing the cross-country championships the day before, this was a good performance by everyone, with great times recorded.

Tony led us home looking very strong; a good sign for next year we hope – Spencer

It was a very chilly morning but the sun was out for this 10k that sees you doing one lap and a bit around the very scenic (and undulating) Draycote Water. Just over 100 runners took part in this event which seems to be getting more popular with each time it is staged.

Good efforts by our two Northbrookers, especially Helen who smashed her PB. It’s well worth doing as for £12 you got a lovely medal and very nice goody bag. I might just do the next one myself – Sarah McNaney 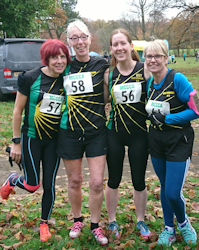 Eleven Northbrookers headed to Nottingham for the Brooks Women’s 5 & Men’s 7 Mile Inter-Counties Championships. This appears to be an event struggling to find competitors but those who turned up were there to show what they could do. Amongst our ranks were two cross-country novices and five 100% cross-country attendees this year to date.

The setup here is great, with a lovely warm clubhouse with a bar and shower facilities. A different course which involved a small hill, a low log crossing and some trail areas. The competition was stiff both in the men’s and women’s events. 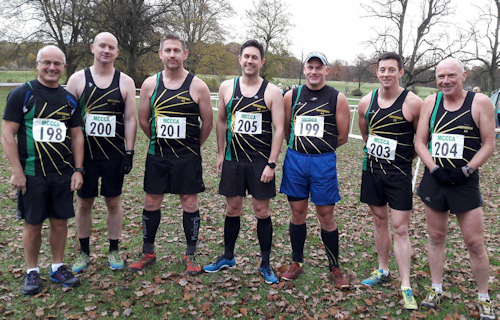 The women started first and their reports were of a dry course, with spikes not necessary. They all put in some great runs and supported their “novice” Sue home, who finished with a smile. Maybe she has the cross-country bug now. The men (being slightly heavier) foundthat spikes were needed and there was some fantastic running accomplished. Great runs by all and, like Sue, Andrew finished and smiled later.

Support was from each team and the O’Shea family turned up in force to encourage us and keep us updated as to what was going on. Thank you folks for the great cheers that we needed on that 3rd lap – Spencer

46 miles and nearly 6000 feet of elevation over two laps. A bit damp but enjoyable – Tony

Starting at Pride Park which generated a bitterly cold wind tunnel, the course ran away from the city along side the River Derwent on traffic free paths followed by a not quite so scenic section alongside the A6. The course then looped round Elvaston Castle Country Park which included some slightly muddy sections before heading back into the city alongside the river again.

Once we got going the running conditions were excellent apart from a few icy gusts of wind on the return. The finish included a loop round the outside of the stadium. A single lap flat course and a well-organised event topped off with a nice bright green technical T-shirt – Rob

Just the two of us headed over to Coalville to run a 10K. With the previous day’s cross-country still in our legs and someone getting a year older it was a good opportunity for a birthday race. I was aware this was 50% road and 50% trail but the recent rains meant that the fields were boggy and underwater and the muddy hill climb defeated my trail shoes every time. Martin quite happily informed me his worked really well.

This is a low-key event, very few club vests put the pressure on us from the start, and with 218 involved in a 50-metre squelching sprint to the greasy tarmac down hill it was elbows out. It all worked well for the two of us as we manouevred ourselves into position and ran to the finish. Great run, not so much fun and we got wetter and muddier than in the previous day’s cross-country – Spencer

25 men running, 1 officiating and 2 supporting plus an additional supporter all undertook the trip to Lilleshall and all were excited to get the campaign under way. Talk of last year’s race staged here here was foremost but totally different conditions meant this was a good tester. No wind, dry and cold, with boggy ground, a short downhill section and a longer uphill sections awaited us.

Every one put in a fantastic performance, from the seasoned campaigners to the “cross-country virgins”. We cheered everyone of them home and encouraged each other around the course, and battles with colleagues helped us force our way up the field. Make no mistake, this is not a campaign we are going to turn up to and walk away with. We all know what a race we have on our hands for the rest of the season. The standard of the division has increased, points are only won by hard racing out there and we need to do it all again another three times yet guys. But, I know we can do it.

A muddy, off- road, 15.5 miler in undulating Leicestershire.

Just under 5 miles of crazy mud! My first true fell race but great fun. Miraculously, I survived the course without injury despite falling in twice at a river crossing near the start, and time had no meaning.

The results list is tricky to fathom, with no overall list of race positions. I know I was 59th O60 out of 95 (male and female) and am guessing I was about 246th female out of 513. Would recommend though to mud freaks for next year.

A sunny but cold day greeted the 17 Northbrookers who headed over to Chelmsley Wood for the start of the Centurion Grand Prix 5 mile series, perfect race conditions. Nerves were aplenty on the start line and a narrow stretch at the start meant you stayed where you started for the 1st 600ish metres. Then you could open up and make up ground. We were all spurred on by a noisy support crew from the children’s play area and by Paul Cozens and Cath Fenn.

There were some very good and close battles right through the field with a splattering of PBs rewarding the efforts put in (there may be more but I didn’t get a chance to catch up with everyone afterwards).

This is a low-key, good value for money, flat and fast course and well worth a visit over the 6-race series if you want to see what’s achievable.

Great organisation, very friendly and 15 minutes up the road. See you all there next month – Spencer 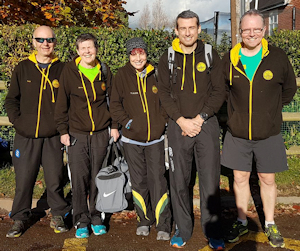 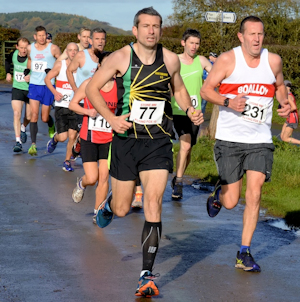 Two years ago six club members ran this race in mist staged on the edge of the Stafford moorlands (around Standon village) on a very undulating course – 2 PBs then. This year, having battled through lashing rain showers on the M6, the hills and valleys of North Staffs were more than generous in showing us this very picturesque route. So just over an hours drive on Sunday morning it was well worth it.

We loved the course and, as always, what goes up must come down. And so the “foxes were flying” as we descended the main hill at just over 6 miles. We all ran decent times with Andy Mc on his debut 10-mile race pulling out a very creditable 1:06 and bagging 100 points in the RRC table for a couple hours, before Damian and the Rockingham crew completed their race – Kevin 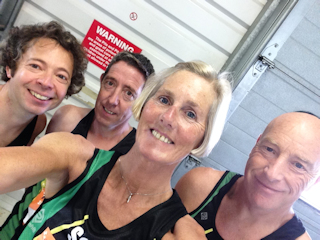 A well-organised race around the Rockingham Race Track – 3 laps to be exact. Not quite pancake flat but almost. Despite the late start (1pm) there was a good turnout for this race that ran alongside a 10k and a 5k race. Apparently there was also a duathlon but that took place in the morning.

It was really nice not to have to jostle for a place and we found that we could settle into our stride quite early on. We were also very lucky (unlike last year) as the sun shone, although the wind in places made some sections of the race hard going. However, we all ran at a good pace and even managed to bag a few PB’s!

We may very well do this one again – if only for the fact that we did not have to queue for the loos or anything else, there seemed to be so much space to relax in. The only negative is that we all clocked over ten miles on our Garmins which is not good when it’s advertised as being measured correctly.

Oh well, the roast dinner consumed afterwards made up for everything – Sarah

After the early Saturday morning downpour the sun came out to greet the 32 Northbrookers running the 33 legs of the Warwick Uni Relays. A massive uptake on this event made running teams against each other more of a challenge but it kept us all going with a close competition all over.

Great times were recorded by all out there on the slightly boggy fields which resulted in a 3rd place for one of our women’s teams, and Amanda claiming the fastest woman’s time of the day.

Overall we were fantastically represented, had excellent support all the way round and even coaxed one of our members into managing the teams for us all.