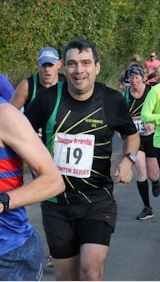 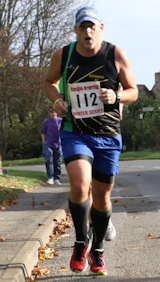 Five Northbrook members headed over to Ilmington for the first race of the winter series. It was a bit “blowy” at the start which meant that by the time we hit the top it was going to be a lot worse, and so it was. For once I did not take in the views, I was more interested in picking up what I had lost coming up the hill to make it down the other side. Then the added feature came into play, the local farmer brought his flock of sheep out to spectate and encourage us. The farmer was so apologetic, but I thought it was great, a bit of sheep dodging while trying my hand at sheep whispering. The whispering failed but I got through the flock and could really let go all the way to the bottom of the village.

In the end a good time from all 5 of us; the un-initiated looked shell-shocked, the other 3 of us wondered if the XC relays the day before had been such a great idea.

I would recommend this series or the individual races, as they will teach you how to race up and down hills – Spencer

With storm Brian due we were all watching the weather closely, but it takes more than Brian to scare off 23 hardy Northbrookers heading over to Aldersley Stadium.
This was the 1st cross-country event of the season and, despite one late drop out, we fielded 7 teams. It was a great turn out from all, ranging from novices, Northbrookers returning from injury and old seasoned campaigners. The temperature was cold and the wind was blowy, but the ground was reasonably dry underfoot. Once we had got ourselves organised and watched various other clubs tents blow away we got on with the business in hand with everyone putting in excellent performances. Our supporters were loud with their encouragement and even managed to cajole other clubs’ supporters into supporting us. This was a great event where we had a large presence; maybe not toward the top of the field but we were there. Next up the Warwick Uni relays – Spencer

The race literature promised a pb as it was a ‘fast flat course’. I wasn’t disappointed as I picked up mine. The course is not that scenic but the race was very well organised.

Lakes in a Day Ultra – 7 October

A beautiful 50 mile ultra from Caldbeck to Cartmel in the Lake District taking in 4000m of elevation.

Another Sunday morning 10km race for the Cozens. Shelton Striders 10km was fairly flat and run on both trail and road. It was well organised and marshalled and there was cake at the end! I had a great run it was my fastest time this year and my second fastest ever. Not so good in the age category this week though – Julie