One of those How Hard Can It Be events, starting in Coalport and following the Silkin Way and negotiating the roundabouts of Telford, all in heavy rain. Only 37 on the marathon course so rather lonely, but met some fabulous people.

The Equinox24 is a 24 hour mixed terrain race around a 10k loop against the clock, set in the Belvoir Castle Estate.
Nervous excitement was the order of the day as the sun broke through to give warm conditions with still wet ground
underneath.

Four Northbrookers competed in a 10k race held over the first lap of the 24 hour event. They completed the same course as the main event giving them an inkling of what was coming up for the rest of us. 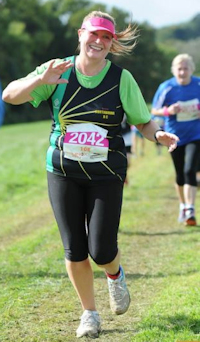 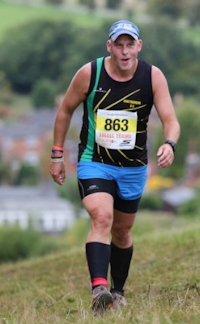 Northbrook descended on Belvoir Castle in various teams and sizes to enjoy the Equinox 24 Hour event. From solos to pairs to a team we were there to enjoy ourselves and run as far as we could. A wet start on Friday night saw the Beer Mile reduced to a field of 30, but 2 of us gave it a go. I think the drinking skills need to improve as the run was far better than the attempted drinking. Saturday, no rain, warm weather and the anticipation of a 10k lap with various features such as “not that hill”, “that hill” and “the field” all lay ahead of us. What could go wrong? Nothing it appears.

Jo had a flyer, completing her first 10 laps in 12 hours, and her next 6 laps saw her digging deeper than we had ever seen before. Massages, support from the sidelines and walking company by all her family and colleagues from the team got her through to the end. An amazing woman.

In the pairs, Helen stuck rigidly to her plan, and it worked, the pair achieving what they wanted and finishing high up the board. Helen was very organised between runs with rest and fuelling which meant we hardly saw her from Midday to Midday, her pit crew working just as hard to keep her rolling.

In the the team, apart from a few last minute sprints up the finish straight to get to the handover in time, we all performed as we expected. Consistent laps and having the ability to change plans to suit the whole team kept the morale up and everyone going forward. The supporters had all ran the 10k race so they deserved their rewards and made all the noise needed to keep us going as we turned onto the finish straight.

A great event with more friends than just Northbrook and encouragement all around. We shall return next year.

Finishing positions haven’t been published but we estimate that:
Jo Brown was either 3rd or 4th solo lady
Helen Wyatt’s pair team was 2nd mixed pair
The small team were 6th small team.

Inaugral Nuneaton 10k hosted by Nuneaton Harriers. Enjoyable road race setting off from the Town Hall and then 3 laps on roads encircling Pingles leisure centre with a detour into the park for each lap. The route then finished at Pingles stadium track where we were greeted by the Lord Mayor dishing out medals. A flat course with PB potential. No chip times this year, but believe they’re being considered for future events. 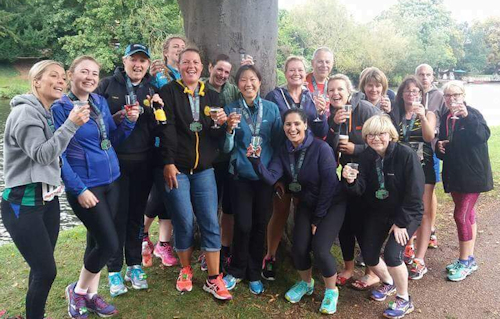 Sunday morning provided perfect running conditions, and for the 10K training group this was the race they had worked towards for 18 weeks. Eighteen from the group turned out with most of them now in club colours, and the Northbrook contingent in total was 25. All were nervous with the thought of PB’s and the memory of the furnace that was the Northbrook 10K. With some coming back from injuries it meant that the chat beforehand was all about various excuses.

As soon as the hooter went thoughj it became serious, all excuses were forgotten and everyone put an effort in with some great performances and fantastic improvements by the 18 from the Thursday training groups. It was great to see the results of their training, and most of them are now nervously looking forward to integtrating into the Wednesday sessions.

Prosecco, cola (for the drivers), cake and snacks (as well as a few tears) accompanied the post-race celebrations in the park, and they left not only great friends but by now also Club colleagues – Spencer

The Marathon route started and finished in Brockenhurst and wound its way through the heart of the New Forest National Park. The multi-terrain course was promoted as offering one of the most scenic running experiences in the country, with a blend of forest enclosures, open roads, far reaching views and sight of the famous New Forest ponies. There was plenty of rain too.

The scenery was beautiful but I couldn’t really appreciate it because of torrential rain, high winds and mist. 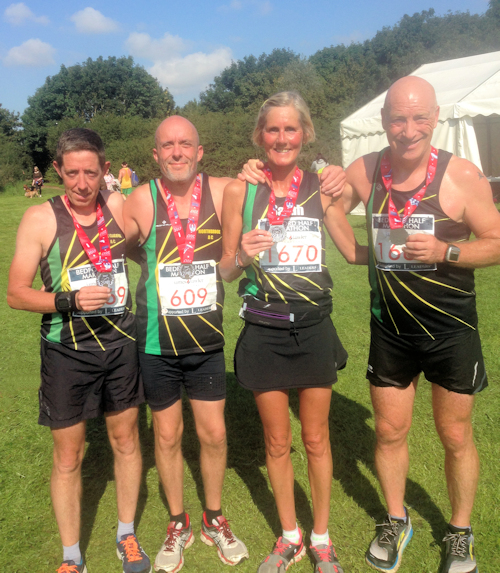 This was the inaugural holding of this particular Bedford Half Marathon and should not be confused with the well established one that is held in December.  This particular event was hosted by a new running club (Bedford Running Club – novel name) and was a very well organised race.

The course was around a park and country estate and was virtually pancake flat, apart from the one bridge that you had to go over (twice) that traversed a canal.  Fully tarmacked pathways with only about half a mile on grass at the end added to the excellent route.

I could not fault the organisation of this event.  It was definitely looked at from a runner’s point of view and not once did we have a problem.  Everything flowed beautifully,  the baggage drop, the waves that runners started in, the water stations, marhsalls on the course, signage, the finishing funnel – everything had been thought of to ease the race along. And with over 2000 runners taking park, this was no mean feat!  The park at the end had even been turned into a fun zone, ideal for families and supporters who may have come down to watch as there were stalls, bouncy castles, live bands and plenty of food to eat.

It was a brilliant day out and some reasonable times done by all – especially by Joe who smashed his PB.  Just hope Steve’s legs held up as he was the mad one doing the Kenilworth Half-Marathon on the Sunday as well – Sarah

For a complete results listing view the Results Index