Liverpool Rock and Roll Marathon – 28 May

Liverpool Rock and Roll Half-Marathon – 28 May

Smiling in anticipation of beer

A great night for Northbrook at Stratford on Friday at the Tempo Events Run for Beer relays. It was great to see so many of us out in our Club colours representing the Club in a very social running atmosphere. Four runners made up a team and each leg was 2 miles. It was very warm as the first leg runners set off, the shadows getting longer and the temperature more more comfortable as the night went on. Very good times were recorded by all and everyone was eager to swap their number for a well deserved free drink at the end of their leg.
Finishing with a 2nd position women’s team and a 3rd position men’s team we were all on a high as we headed off to the nearest drinking establishment to talk through our experiences.

This was the inaugural Firkin 5 race and the weather on the build up to it caused some of the off-road sections to resemble a cross-country course. Not put off, Martin and I headed down to represent the club and show support for new events. What a gem we found, fast roads and technical off-road sections gave a great feeling of being involved in something special. The free food and pint afterwards made it even more worthwhile.
Definitely something to recommend the next time it’s on – Spencer

Times are not indicative of pace as leg distances vary

*Each covered half of leg 8.
2nd placed mixed team. 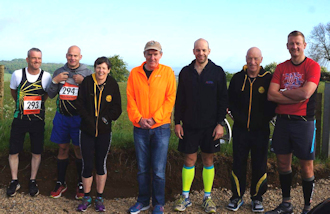 Smiling in anticipation of Leg 3

A great day spent in the Cotswolds with tremendous team spirit and fantastic team management by all. It was good to see a contribution from all 4 levels at the club epitomising this event as a TEAM event for all. It started in a downpour and finished in the usual oven conditions.
Well done all.
Roll on next year – Spencer

Fourteen club members made the short trip to run round Shakespeare’s homeland, 8 doing it once (Half-Marathon) and 6 taking on the double challenge (The Marathon).

On what was billed as a perfect day in the mid-week weather forecasts, heavy cloud and a slight northerly breeze became bright sunshine by 9am on a day that just became very warm. So, instead of temperatures ranging from 9 to 14 degrees, by 11am it was already well over 16 degrees and rising. Even so some were able to ride the unexpected heat wave, turning in one Marathon PB and two PB’s in the Half-Marathon.

It was my first Stratford Marathon and 3rd ever, and I have to say I would do it again. I was more than happy with my PB, taking almost 3 minutes off my Paris run in 2016. Being a two lap route there was the extra mental battle with knowing we had to run up the hill just past Welford twice but we were rewarded with panoramic views and village after village of thatched cottages, mowed greens and spring flowers. In amongst all of this were the Northbrook support crews with Joe, Sarah and Craig on the Long Marston Road and Jo and Rachel popping up twice on the “baking hot” Greenway with invaluable cheers of encouragement at mile 23, plus Tom Miller, Tony Forde and the Houstons holding fort at the start and finish.