The weather was glorious this year for the annual trip to Cleeve Hill. What beckoned was 14.5 miles of steep hills, various trig points and views into Wales from the top. It is a fantastic and hard course, but with 2 of us chatting all the way round the miles soon ticked off – Spencer

Two Northbrook women’s teams raced in the spring edition of the Sutton Park road race relays. The event always draws in the top athletes from across the Midlands, and 2017 was no exception. Both of our women’s teams ran well finishing in 28th and 49th places out of a total of 57 complete teams. As ever we had excellent support, with a few injured women leading our cheer squad – Clare

A sunny but very long day in Sutton Park for the Mens 12-stage road relays. 36 men (and 1 on standby in Coventry) set out to represent us in a tough, fast race. This was an event both for seasoned campaigners and new campaigners from Level 1 through to Level 4, and it was great to have such interest. The plan was to have one team (A) competing and 2 teams (B & C) racing against each other to keep the competition and interest going all day. Everyone outperformed what I expected with all of us putting in some amazing times. A great atmosphere was created with supporters and fellow runners giving everyone of our runners a tremendous reception on the run up the final straight – Spencer

This year the Coventry Half-Marathon was arranged at very short notice when the original organisers pulled out. Northbrook AC and other local clubs were approached for help and Dave Long, a Coventry running legend who ran in the Barcelona Olympics marathon, was very pleased with our response.
The Northbrook zone was in the rural parts of the course including Washbrook Lane, Bridle Brook Lane, Wall Hill Road, Hollyfast Lane, Tamworth Road and Long Lane, between miles 5 and 9.
At short notice, and despite other races on the day, Northbrook were able to provide very enthusiastic support along the route. The Northbrook colours were well-displayed, and every competitor will have noticed our presence.
It was great to raise the profile of the club, and thanks to everyone who helped on the day.

“Hi Guys, think you should all bask in the glory of this one. Thanks a million – “By Coventry For Coventry”. Please pass on Lee House (race organiser) thanks to all of your people”. – Dave Long

“The Northbrook AC support today was fantastic. Thank you from the bottom of our hearts. It helped get the three triplets Nadine, Emma and Anita round”. – Nadine Owen

The Fradley 10k is based around the village of Fradley in Staffordshire.  It’s billed as a flat and fast, closed road PB course, and they are not wrong. It starts on a quiet road next to the canal and the only elevation is over the canal bridge to the beginning of a two lap course around the leafy lanes. It’s a well-organised event with a surprisingly large field of 1000 runners, and it lived up to its flat and fast billing with Rich and me both walking away with PB’s – Damian 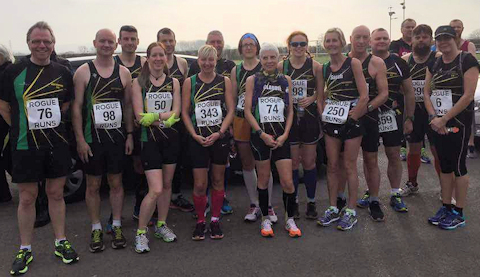 It was an early start for this scenic 20 miler somewhere down towards Bristol.  What a fantastic Northbrook turnout it was this year for what is essentially a low-key race.  It’s always a small field of entrants so registering early is always a bonus but, although the field maybe small, the enthusiasm of the marshals dotted around the course wasn’t.

It’s basically a two-lap route around some very pretty villages, all of which seem to circle an enormous hill (which luckily wedid not have to climb). Quiet country roads with very little traffic made the run quite pleasant.  However, the heat took us all by surprise and those who opted for vests and shorts (rather than base layers, thermals, fleeces or duffle coats) fared somewhat better.  A few PB’s were bagged by some, others were experiencing their first 20 mile race.  Some were injured but managed to get to the finish line. and unfortunately a couple of our runners had to pull out during the race due to specific injuries (a tough call but a wise decision).

The finish was within the grounds of the small leisure centre and am pleased to say that Tommy (who led the Northbrook posse round), made it back just as the bar was opening.  Most of us others opted for the free coffee and the home-made cakes, although I did spot a few other pint glasses littering our tables – and why not.

All in all, a good race and highly recommendable. It was £16 to enter with a T-shirt, medal, bottles of water all round the course, hot drinks and cakes at the end – perfect!!   Might just go and do it again next year –  Sarah

Only 77 turned up for this months Grand Prix race, the torrential downpour beforehand and the Warwick Half on the same day being influences that affected the turnout. Only the 3 Northbrookers made it this month. The rain did leave a lot of large water sections on the course that left no choice but to plough through the centre of them. This felt a lot easier to run than I gave it credit for but I have finished cross country races a lot cleaner than I finished this one. One race to go and it’s a special one – Spencer