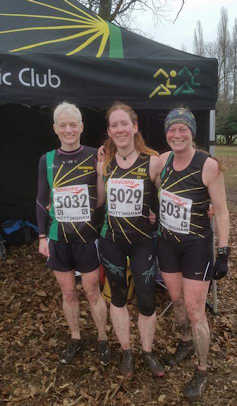 Eight Northbrookers headed over to Ilmington on a pleasant Sunday. The fifth and final race in the series saw us tackle “the hill” first. Tony set himself a task by starting at the back but soon carved his way through the field with the added incentive of targeting “the next” Northbrook vest in front of him. As always in this series what you go up you will come down and for me it gave me a chance to juggle water and chase the pack of Stratford runners out in front. Afterwards I was glad to think that I would not be seeing “the hill” again until the next series, and with the added warmth from the series prize of the hoody and the packet of sausages there was nothing left to do but see Jill claim first in her age position and all the other ladies finish in the top three for their age categories – Spencer

I ran the Dorney Lake half-marathon today (The location of the 2012 Olympic rowing events). Lovely flat course however half of the lap is very open to the head on wind which either picked up as the race went on, or I was tiring quicker than normal!

Corinna, Guy and I made the journey down to Wokingham for one of Corinna’s favourite Halfs. It was cold, wet and dark when we left Coventry, but when we arrived in Wokingham 100 minutes later it was dry, light and still cold. We had been making our excuses for days, tight calfs, tighter hams, full of cold, cold feet, colder fingers, not ran for a while, ran too much, dog ate my training schedule – we had them all and were sandbagging to the max. As all runners know, we have to make these excuses just in case it all goes wrong and we can reel them out again to our running friends. This cunning ploy obviously worked as we all left with shiny new PBs, the race securing its place in the list of favourites for another year. The hot showers and the free hot drinks at the end helped cement this position – Damian

Another great performance was put in by the ladies team at Warwick Univerisity. Amanda Deavy returned for her first race in over three months and put in a storming performance. The combined effort led to the masters’ team finishing first on the day and second in the season. An astounding performance by every runner across the four league games resulted in the ladies finishing in 4th position overall. Cruelly we missed out on promotion by just 11 points. – We will be pushing for promotion in the 2017/18 season. Roll on November – Clare

Twenty-one Northbrookers patched up the club for the final race of the season, with a cunning (and great) course set out by Tony and companions. We turned up in the snow and wind and rain. Our “12th” man today was indeed our supporters/marshals who pushed on every Northbrooker as they approached and passed. It worked, as we all ran out of our skins and achieved the season’s goal of staying up in Division 2. A fantastic performance on the day followed the good work done all season to carry the club over the line. Thanks to all who have run all season long, and to those who stood in to bail us out on the last race.
The next season starts in October (unless you are doing the Nationals in 2 weeks time) – Spencer

The South Devon stage of the Coastal Trail Series is something of a cult classic. The course is contained within an Area of Outstanding Natural Beauty (AONB) and is simultaneously picturesque and punishing. With its blend of jagged rocks interspersed with idyllic sandy coves, this coastline is jaw droppingly beautiful and hugely inspiring. You weave your way around the technical coastline, before heading inland to tackle a few of the infamous Devon hills.

It was insanely hilly and muddy, but had stunning scenery and lovely weather, really tough but heaps of  fun – Amy