Eleven Northbrookers and one supporter made the trek north to Loughborough to represent our sunburst. We managed to field 2 complete teams, almost half of us suffering knocks or niggles as a very long XC season is starting to take its effect, on a very sticky and hilly course. In cold weather conditions varying from sunshine to driving hail and rain we gave the best we could.
The ladies went first and, with only 30 minutes before the men started, our solitary supporter did her best to get out and cheer them on. The men of course were still sheltering in the  gazebo at this point, more worried about our hair and the cold. When we did start the ladies must have wondered what was heading towards them as close to 400 men cleared the brow of the first hill and headed down onto the course with them. Our ladies were safely through and soon finished, then retired to the relative warmth of the gazebo to recover.
Then the weather turned for the worse, the ominous dark cloud got darker, and the rain and the hail stung as the climbs kept coming. Could it get any worse? What we were told was a 12km race seemed to go on considerably longer. The commentator was confused as to where the men had got to, we were confused as 12km rolled past and then they sent us round again!!!
Rory led us home dragging the rest of us with him. Our last man in seemed to suffer at the hands of the course measurement/marshalling mistake as he found himself in the sprint with the winners to the finish line. Being an honest Northbrooker, Phil turned round and went out to do the last lap again ensuring his distance was substantially further than that of the rest of us.
No fear though, we were home in time for tea at the Awards night – Spencer

Four Northbrookers headed over to a sub zero Ilmington for race 4 of the winter series. Clearly the weather did not put anyone off as the race was at capacity again. Not my favourite way round this time as definitely uphill for most of the route. But what you go up you must come down, and the downhill this way brings a smile to most faces. Overall, good times recorded by everyone. Claudie got 1st in her age category and with one more race to go we await the coveted hoodie – Spencer

This is a 12km road race starting at Tiddington and running up Loxley Hill before plummeting down through the village and back towards the start.
Three Northbrookers started and finished in what is a very competitive race. The start is a narrow lane for about a mile which means positioning at the start is essential. Then you climb to the start of the Loxley Hill, this time round a pack of eight deer were spooked as the runners passed. On reaching the summit the views are quite spectacular and this sets up the remainder of the race. My legs kicked in after a mile and I started chipping off the runners ahead of me. The pace felt like it was quickening all the time and I came in 1:30 mins ahead of my time last year. After Saturday’s cross-country I will take that as a result – Spencer

Six Northbrook ladies raced at Wolverhampton. Great running by the team led to our lowest points total over the season and a finishing position of 6th on the day. Across the three league races Northbrook ladies are in 7th position, whilst our masters team is in 3rd – Clare

Birmingham League Race 3 was held at Lillishall National Sports Centre at Telford. Conditions were dry and cold for the race but underfoot the ground was spongy, slippy, undulating and ankle deep in places. With this race being the furthest away for us this season, I was hoping for a good turn out, and the guys surpassed my expectations. Twenty-two runners and one supporter (Chairman Bob) made the journey to a windswept field. We were faced with 4 laps but we were more than ready for the task ahead. With 7 of our guys in the top 100 (staggering performance) and a very loud and encouraging Bob we all had competition right through the field. Our top 6 are getting faster and they know there are others who want those coveted places. The top three ‘A’ teams in the division get promoted, the bottom three ‘A’ teams are relegated.

There is one race left on “home ground” so it’s all hands on deck. If you can run you are needed, if you can’t run you are still needed. The guys need your voices to keep them going. We have a chance to be the top placed Coventry club in this league and we want to show what we have got. Your support will make the difference. RACE ON – Spencer

Eight Northbrookers headed over for the 3rd race in the Centurion Grand Prix series. Four finished after one of us suffered a tumble on the course and one found the return on the road to recovery a little premature. Three of us had raced in the Warwickshire cross-country champs the day before and I for one suffered on tired legs. The race was short on numbers so runners soon became spread out allowing us all to have our own battles out on the course. Great running on a friendly, local and well organised event – Spencer

Eight Northbrookers headed over for the 3rd race in the Centurion Grand Prix series. Four finished after one of us suffered a tumble on the course and one found the return on the road to recovery a little premature. Three of us had raced in the Warwickshire cross-country champs the day before and I for one suffered on tired legs. The race was short on numbers so runners soon became spread out allowing us all to have our own battles out on the course.

This event was a full program for all age categories for qualifiers for the Worcestershire and Warwickshire counties. As a result the course was fairly well churned up in places even before we started. With the weather being warm and dry for the time of the year the women went first, they all made “the ditch” and “the hill” look easy. Fantastic runs by all the women on a tough course giving us an 8th place team result.

The men were second off and with a good turn-out and buoyed by “the ditch” 3 times and ascending “the hill” 3 times, we all made a tough course look easier than it was. Fantastic runs by everyone right through the field. The men came 9th out of 15, a great result. Bring on the next league race.

A big thank you has to be made to the number of supporters who came out to ensure we did not drop off the pace at any point in the race. 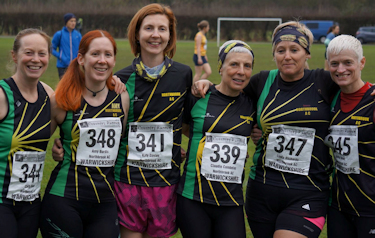 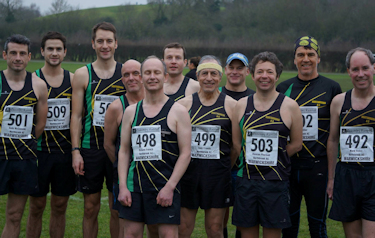 Massey Ferguson staged their New Year Pace Race at the War Memorial Park where the paths were icy, the weather cold but sunny and about 130 runners turned up to compete. This was a race with a difference, runners had to predict their time to complete the course of 3.55 miles then with no time or pace aids try to finish in that time or as close to it as possible. The winner was not the first over the line but the runner who got closest to their predicted time. For me this was a challenge as I had no idea what pace to go for. I had to turn off the distraction of everyone else and try to keep as steady and rhythmic as possible. I failed hopelessly, but the Queen of the pace was Julie Cozens. It goes to show that it’s not all about speed, the ladies were the three closest to their predicted times. Gents we need to improve! Just for the record, the winning lady was just 2 seconds off her predicted time and the winning man was 2 seconds off his predicted time – Spencer