Due to the coronavirus outbreak the Summer Handicap series is suspended for the time being.
Why not have a go at our virtual handicap.

About the handicap series

A series of 6 races per season over a designated 5 Kilometre course.
The Summer Handicapper calculates handicaps and publishes results separately for men and for women. Basic points are awarded in each race according to finishing position, eg 200 points to the first man, 199 points for the second and so on. Similarly the first woman is awarded 200 points, the second 199 points and so on.

Additional points (Bonus Points) are awarded for Personal Best performances in a race, provided that the member has completed 5 previous races over the same course. If all 6 races are completed in a season the 5 best points scores count towards the total.

All participants are given a barcoded tag at the first race which they keep for the whole season, returning it after the last race. The barcoded tag is needed to record thee finishing position in each race.

How do I get a handicap time?

If you competed in a Club handicap race last season the handicapper will have worked out a handicap time for you. If you are new to the series then you will be invited to suggest a realistic time for the course, and a suitable start time will be allocated.

Where do we meet?

What about the route?

The route starts at the bollards mid way along Butt Lane, proceeds along Butt Lane, turns left into Staircase Lane, follows Staircase Lane and turns left when it reaches Coundon Wedge Drive. Remain on the pavement all the way along Coundon Wedge Drive, crossing Lyons Drive at the roundabout by staying on the pavement until the crossing place is reached. 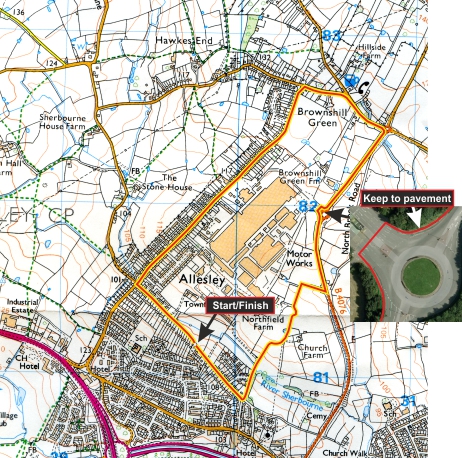 Stay on the pavement – DO NOT SHORT CUT BY RUNNING ON THE ROAD. Refer to the map.

What happens at the finish?

There is a finishing funnel where you are required to present your barcoded tag for scanning. Stay in your finishing order and make sure you present your tag. If you don’t have a tag we can’t record your finishing position. The handicapper will calculate the results, which will be posted on the club website a week or so later.

Are there any prizes?

There is a £5 prize voucher for the first male and for the first female in each race, and a prize for the male and female series winners. Prizes are presented at the annual Awards Evening.