Presentation of the Club's annual awards took place at the Jaguar Sports and Social Club in Coventry.
Chairman Bob Adams introduced the award winners, and Denise Ladbury representing one of the Club's sponsors, presented the awards.

* Ran legs 3 and 4 of the Hilly 100
** Competed in Ironman Triathlon and swam the English Channel.

Special awards presented for excellence in other competencies:

Boxing Glove Award - Martyn Brunt, for holding his own in an altercation with a pedestrian

Pudding Award - Rob Pool, for consuming the most desserts at a Club social

Coach of the Year - Sarah McNaney, for keeping a tight rein on Level 3

Vest of the Year - Lisa Bragg, for initiative in blagging a new Club vest 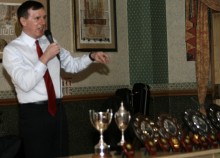 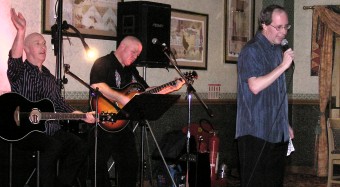 Mark on vocals with backing duo The Shuffles